The Box section of the Clarks Fork of the Yellowstone is the third deepest canyon in the lower 48 and is infamously known for being the best paddling in Wyoming.  The canyons were deep and the granite   was smooth and good times and lines were shared by all!  Jordy and I ended up doing two laps of this multi-day gem and sent the second lap in a one day push, completing the run in only 6 hours!  We had a blast with all the cool people and enjoyed the dirtbagging thoroughly!!


Posted by Soul Paddler at 2:36 PM No comments: 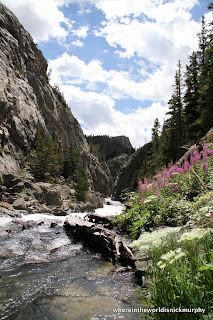 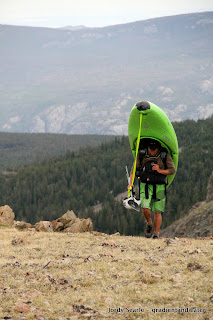 So epic in every way! Our mission in the Wind River Range of Wyoming eclipsed the amount of effort of expedition's such as the Middle Kings!

An amazingly beautiful place that might not be suited for kayaking! 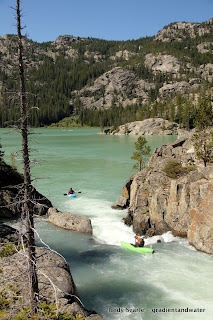 My original plan for the summer was to slowly but surely make my way from Cali up through the Pacific Northwest and into British Columbia, following the west coast and pushing north.  All was going to plan until I veared east out of Washington state into Idaho and then eventually to Wyoming putting my entry into B.C. over a month behind schedule. The best plan is no plan with a constant of Charge. And with this theory in mind I have been charging life and found myself hiking into the most intense arena I have ever visited- A first descent of the N.F. of Bull Lake from the base of the glacier's on Big Milky Lake into Bull Lake Proper.

Starting the hike early in the morning after being dropped off in the middle of no where, we presceeded to start our 11 hour death slog, in the rain, up and over a 11,000 foot pass, following game trails, keeping an alert eye for bear's, even further into the middle of no where!  So Epic!

Fresh out of the Lake on day 2 we started into the North Fork which to our knowledge was virgin territory and we were about to figure out why. Finding tons of the sickest whitewater I have ever seen, it seemed like every rapid had somethhing majorly messed up in the intro, lip, or exit!  It was messed up- so tempting to fire but so wrong.  Our descent of the North Fork was so heinous we only managed to make it 2 miles in a matter of 8 hours before our boddies were recked and day light fading.


Day 3 opened up and we were able to make serious river miles.  The rock we traveled over taxed our boats with gouges and major losses of plastic. We found some huge rapids and huge portages and the epicness of Bull Lake was close to overwhelming.  Firing hard we routed some sick rapids and staeady class 5 boulder gardens.  I was in a situation where there was only one way to go- down river!

On day 4 we made a savage 20+ mile push through epic portaging, big rapid's, long stretches of boulder charge, (where Jordy and Myself couldn't resist but leaving the eddies alone and we found ourselves in the flow paddling hard) broken boats, all the way out and across the lake to the take out!


We agreed on the epic beauty of this mission and the fact that after completing it, we had done it and we would never have to do it again!


Stay tuned for Wyoming part 2 - The Box of the Clark's Fork of the Yellowstone!
Posted by Soul Paddler at 2:16 PM 1 comment:

I had always wanted to visit the Payette but just never made it due to my focus on Cali.  With the Cali season ending early I was stoked to go dirtbag the Payette and reap the rewards of roadside access.  What I found blew my mind. The Payette is probably the most bang for your buck river I have ever been blessed to paddle. Straight Gangsta!!!!!  With a quick humbling it took a lil longer to memorize the big water lines than I had expected.  Once the lines were down, It was GO TIME, with inspiration from Nasty Nate Klema I began to boof everything and the kickflips seemed endless. We originally planned to stay for 5 days which became a rad 19 at this amazing river!  I tagged 20 plus laps top to bottom and even bagged a vertical mile in a day with my buddy Seth Swallen.  Jordy Searle and myself thoroughly enjoyed the company of all the Bank's and Boise locals and guarantee we will be back next spring for the infamous high flows!!   This  river got me ready for the shit- Boot Camp!

In short, we headed to Lower Mesa Falls to huck the infamously gnarly right side and ducked our heads in fear.  Here are a couple shots of the much less stressful left side.

Epic Expeditions in Wyoming next!  Keep tuned and as always - STOKED!
Posted by Soul Paddler at 4:37 PM No comments: